How Economic Growth is Killing Our Planet

All the time we hear politicians and economists talking about the tremendous importance of economic growth. But as you’ll soon find out, although “growth” is vital for keeping our economy going, it is at the same time immensely harmful to the environment — or, to be more precise, it’s killing our planet.

The Need for Economic Growth

Why is economic growth considered to be a good thing, and what is the need for it in our economy?

To answer those questions, we first need to understand how our economic system — market capitalism — works.

In basic operation, market capitalism can be generalized as an interaction between owners, laborers and consumers. Consumers demand certain products and services, which the owners produce via the employment of laborers (who work in exchange for a wage) and then supply to consumers (in exchange for a fee).

Therefore, it is “demand” that keeps this cycle of buying and selling going. Now, when demand decreases at a considerable rate, it leads to “depression” — that is, an extended period of economic recession which is marked by a significant decline in income and employment. What this means is that the more money people can and want to spend in the market, the better it is for the economy, since it leads to the creation of more jobs and thus to increased income. Hence the need for maintaining the economy in a constant state of growth.

To keep the money in constant circulation, a lot of tactics are being used. One is monetary regulation through the increase of the ease of liquidity (via interest rates). Another is planned obsolescence — that is, the intentional creation of low quality “goods” that quickly break so as to assure repeat purchases. Still another tactic is advertising, which is manipulating people’s insecurities in order to persuade them into consuming stuff. Or, to give a last example, politicians urging us through the mainstream media to keep on shopping regardless of the current state of world affairs, like former US president George W. Bush did soon after the September 11 attacks. 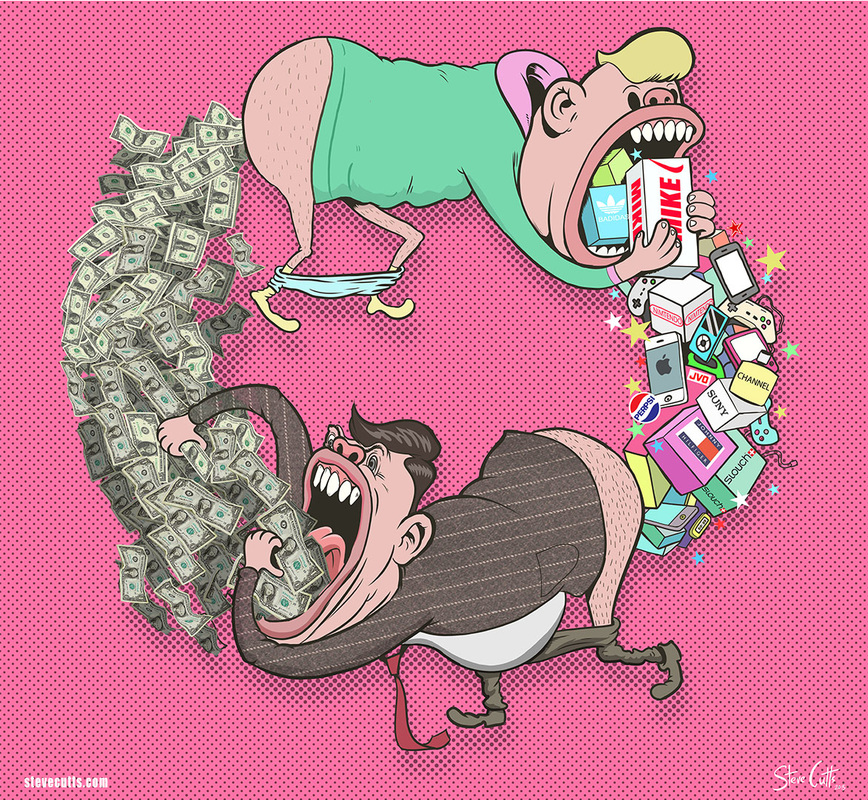 If money stopped circulating, then the entire economy would collapse. That’s why it’s necessary that people consume without end, regardless of what is being bought and sold or at what social/environmental cost. Yet the impacts of our consumption-based economy are horrendous, especially when it comes to the environment, which I’d like to specifically address here.

The Environmental Impacts of
Economic Growth

More economic growth means more consumption, and hence more resources extracted as well as more waste produced. The result? Resource depletion, pollution, climate change and biodiversity loss — just to name a few of the terrible environmental impacts (which are commonly considered merely as “negative externalities“) of our economy. In fact, because of our obsession with economic growth, all of the earth’s life support systems are currently in dramatic decline.

But hey, who cares about the environment anyway? In our growth-based economy, only profit matters. The billions generated as profit for Monsanto is good for the economy, despite that the company is using herbicides that are damaging the soil and contaminating the water. The same can be said about the profits of Dow Chemical, the company which is responsible for one of the world’s worst industrial disasters to have ever occurred that has resulted in about half a million humans still suffering from diseases after that catastrophic event, such as cancer, blindness and birth defects. Or about those of Coca Cola, whose excessive water use in India has lead to the draining of critical aquifers and is ruining the lives of farmers and their families. 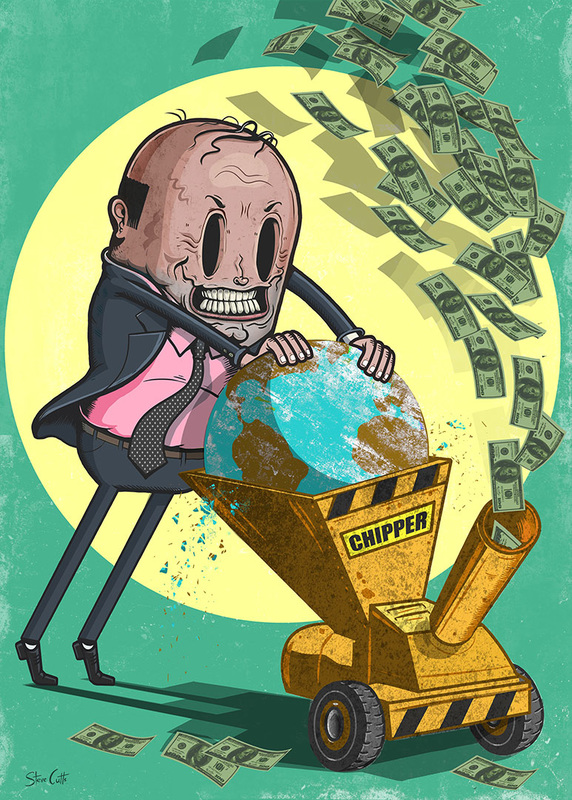 The problem is, we’ve reached to a point where we need to start caring about the environment, before we completely destroy the earth and ourselves with it.

Right now, numerous cities across the globe are running out of drinking water. Climate-driven sea water is rising higher and higher. Our planet is in the midst of its sixth mass extinction of plants and animals. Deforestation is clearing the earth’s forests on a massive scale, thus leading to habitat loss for millions of species, extreme temperature swings and various other serious damages to our ecosystem. Plastic waste is endlessly being dumped into the oceans, poisoning aquatic life, with reports estimating that by 2050 there will be more waste plastic in the sea than fish. I could go on and on, but I think these facts will suffice to show the horrifying situation we’re all in.

So I’m wondering: when are we going to realize that we’re killing the very planet we inhabit and that sustains us?

Moving Toward a Sustainable Economy

Contrary to what we’ve been conditioned to believe, our current economy is nothing but anti-economic, if we take into account the definition and etymological roots of the word economy:

Our contrived economy is based on consumption for the sole purpose of driving so-called economic growth, without taking any serious consideration of the well-being of the biosphere. As a consequence, we are endlessly extracting resources even though we’re living on a finite planet, which is absolutely insane, if you pause and think about it. In addition, we’re mindlessly creating so much waste that all life on earth is suffering from it, including own species. So where’s the thrifty management of our household (i.e., the earth)? 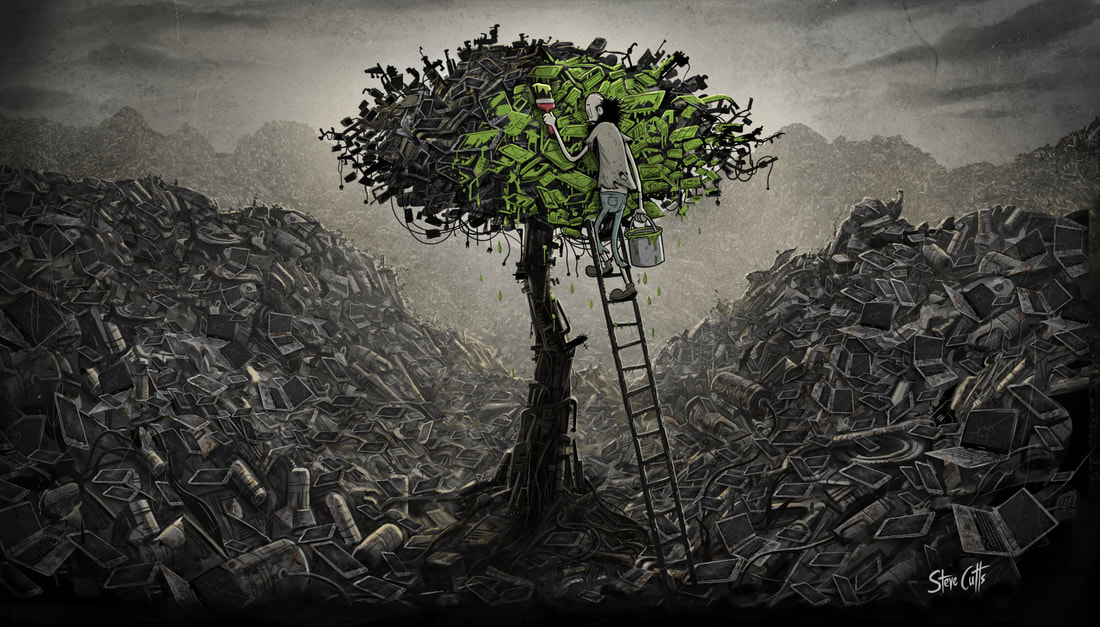 If we wish to stop killing our planet, and instead help heal it from the wounds we’ve inflicted on it, we need to do away with our destructive economic system and design a new, environmentally sustainable one that will be based on the concepts of conservation, ephemeralization, access, and localization. Let’s have a quick look at each one of these and see why they are important for creating an economic model that will exist in alignment with the natural world.

Conservation. Conservation is the practice of efficient use and management of natural resources, as well as the prevention of harm to common resources such as air and water quality. Currently, we’re consuming resources at a greater rate than the earth can replenish, and in ways that are filling the environment with tremendous amounts of toxic waste. For example, we’re using up non-renewable and heavily polluting fossil fuels such as crude oil, although this could be avoided through the intelligent harness of renewable energy sources, such as solar and wind. Unfortunately, our economy sees nature as a commodity to be converted into profit, and hence a transition to non-renewable energy sources is discouraged, since that would stunt economic growth. In addition, because of the competitive nature of the market, those who have amassed great financial wealth by damaging the natural world fight tooth and nail to artificially keep energy sources scarce, so that they can maintain their position of power and differential advantage.

Ephemeralization. A term coined by R. Buckminster Fuller, it refers to the ability of technological advancement to “do more with less”, or to produce a bigger quantity of higher quality goods and services while using less resources and efforts. Our market economy is preventing this technological trend from reaching its full potential, since increased technical efficiency would mean a decrease in jobs (caused by technological unemployment, that is, the loss of jobs due to due to advances in technology), and thus in money circulating in the economy (as we saw earlier, money is the life blood of market capitalism — hence, if it stops moving around, our entire economic model would quickly collapse and die).

Access. Our profit-driven economy depends on the notion of ownership and property. An access economy, on the other hand, is about people gaining access to goods and services through sharing. Just like we can today have access to shared book libraries, the idea of sharing could be extended to include social services such as food sharing, home sharing, car sharing, and tool sharing. By creating an access economy, we’ll all be able to meet our needs and wants, while at the same time dramatically reducing resource extraction, environmental destruction, pollution and waste. The creation of an “access abundance”, however, is hindered by the market economy whose existence is contingent on endless consumption and growth.

Localization. As opposed to globalization, localization focuses on increased efficiency and the reduction of waste by producing locally as much as practically possible. Globalization as we know it today is wasteful and inefficient (just consider, for example, that today the average foodstuff in the US travels 1,500 miles from farm to table, resulting in wasted labor and resources, as well as unnecessarily environmental pollution). Of course, in our economic model companies do almost anything they can to reduce their production costs in order to gain competitive advantage and maximize their profits, such as exploiting cheaper labor in foreign countries. Once again, therefore, we see how market capitalism is the antithesis of what would constitute an actual economy.

As you can understand, we do possess the technical know-how to create a sustainable economy that will allow us to enjoy the best Earth has to offer while still living in harmony with the laws of nature. However, because of our outdated values and notions, we are imprisoned by an obsolete and life-negating economic model that is ruining our lives and the world. The question is, how much more suffering and death are we going to endure before we decide to break free from it?

The post How Economic Growth is Killing Our Planet appeared first on The Unbounded Spirit.