The End: The Power of Finishing What You Start 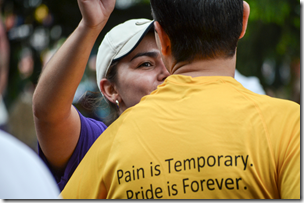 “Finish each day and be done with it. You have done what you could. Some blunders and absurdities no doubt crept in, forget them as soon as you can. Tomorrow is a new day, you shall begin it well and serenely” — Ralph Waldo Emerson

The End is a significant marker for you.

It’s more than just a milestone for finishing what you start.

The End marks the story and the start for new beginnings.

And it’s a powerful way to start new things when you know you, and you alone, can beat your Resistance and hold the power to finish.

In The War of Art: Break Through the Blocks and Win Your Inner Creative Battles, Steven Pressfield shares his story and his insights on what it feels like to finish.

Pressfield was defeated by his own Resistance.

“In my late twenties, I rented a little house in Northern California; I had gone there to finish a novel or kill myself trying.  By that time I had blow up a marriage to a girl I loved with all my heart, screwed up two careers, blah blah, etc., all because (though I had no understanding of this at the time) I could not handle Resistance.  I had one novel nine-tenths of the way through and another at ninety-nine hundredths before I threw them in the trash.  I couldn’t finish ‘em.  I didn’t have the guts. “

Paul Rink inspired Pressfield with authors, self-discipline, and a prayer to the Muse.

“In yielding thusly to Resistance, I fell prey to every vice, evil, distraction, you-name-it mentioned heretofore, all leading nowhere, and finally washed up in this sleepy California town, with y Chevy van, my cat Mo, and my antique Smith-Corona.

A guy named Paul Rink lived down the street.  Look him up, he’s in Henry Miller’s Big Sur and the Oranges of Hieronymus Bosch.  Paul was a writer.  He lived in his camper, ‘Moby Dick.’ I started each day over coffee with Paul.  He turned me on to all kinds of authors I had never heard of, lectured me on self-discipline, dedication, the evils of the marketplace.  But best of all, he shared with me his prayer, the Invocation of the Muse from Homer’s Odyssey, the T.E. Lawrence translation. “

Pressfield kept at it, relentlessly, until one day, he finished.

Via The War of Art: Break Through the Blocks and Win Your Inner Creative Battles:
”I was determined to keep working.  I had failed so many times, and caused myself and people I loved so much pain, that I felt if I crapped out this time I would have to hang myself.  I didn’t know what Resistance was then.  No one had schooled me in the concept.  I felt it though, big-time.  I experienced it as a compulsion to self-destruct.  I could not finish what I started.  The closer I got, the more different ways I’d find to screw it up.  I worked for twenty-six months straight, taking only two out for a stint of migrant labor in Washington State, and finally one day I got to the last page and typed out:

Pressfield slayed his dragon he’d been fighting all his life.

“I never did find a buyer for the book.  Or the next one, either.  It was tend years before I got the first check for something I had written and ten more before a novel, The Legend of Bagger Vance, was actually published.  But that moment when I first hit the keys to spell out THE END was epochal.  I remember rolling the last page out and adding it to the stack that was the finished manuscript.  Nobody knew I was done.  Nobody cared.  But I knew.  I felt like a dragon I’d been fighting all my life had just dropped dead at my feet and gasped out its last sulfuric breath.”

The End Was a New Beginning

“Next morning I went over to Paul’s for coffee and told him I had finished.  ‘Good for you,’ he said without look up.  ‘Start the next one today.’”

What do you need to type THE END on so you can start your new beginning?

Find Your One Thing

Go for the Epic Win

How To Defeat Resistance

The Ego Attacks the Awakening Artist