Supertaskers: How Some People Task-Switch Faster and How You Can Too 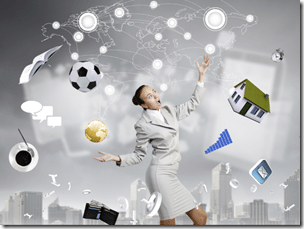 2 percent of the population are supertaskers.  They have extraordinary multitasking ability.

The rest of us struggle with multitasking.  And some of us even have Strategy Application Disorder.

Keep in mind that multitasking is really task-switching in disguise.

In the book, Your Daily Brain: 24 Hours in the Life of Your Brain, Marbles: The Brain Store with Garth Sundem share ways you can fake being a supertasker.

Some Monotaskers Have Strategy Application Disorder

Those who struggle with multitasking might have Strategy Application Disorder.  Yeah, it’s a thing.

“In fact, there really is a medical term to describe those of us who can’t multi-task.  It’s called strategy application disorder, and it’s a kind of frontal lobe dysfunction in which people who ‘disorganization, absentmindedness, and problems with planning and decision making in everyday life despite normal performance on traditional neuropsychological tests,’ according to research published by Paul Burgess in the journal Psychological Research in 2000.”

Supertaskers have extraordinary multitasking ability.  They are also rare.  How rare? 2 percent of the population.

“On the opposite end of this spectrum is a group of people recently identified as supertaskers.  According to a 2015 study by University of Utah psychologist David Strayer, just as the monotasking brain is different from most brains, the supertasking brain is too–exactly 2 percent of us have areas of the anterior cingulate cortex and posterior fronto-polar prefrontal cortex that make us able to do many things at once.”

Most of Us are Lousy at Multitasking

It’s not an IQ thing.  Switching our focus can limit our effectiveness.

“The rest of us 98 percent my have exactly the same brainpower as supertaskers in terms of IQ and other goodies, but when we add task A to task B, we take longer and perform worse than if we had focused on task A and then transitioned completely to task B.”

Successful Multitasking is Task-Switching in Disguise

“The trick to successful multitasking is not, as you might expect, splitting your mind into two sections, each in charge of monitoring and completing a demanding task.

The trick is switching the brain’s attention between tasks so quickly that it looks like you’re doing two things at once.  You start with your spotlight on task A and swivel the light to task B, moving back and forth so quickly that it appears you can spotlight at the same time.  Psychologists call this task switching.”

4 Ways You Can Fake Being a Supertasker

You pay a heavy penalty when you task switch.  But, with the right techniques you can fake being a supertasker.

“When you switch from one demanding task to another, it takes time to get oriented–you pay a time and/or an accuracy penalty, and both tasks suffer.  That is, unless you’re a supertasker.

There’s debate whether you can actually change your brain enough to go from being an average-tasker to a supertasker, but there are certainly rules that can help you fake it.”

One way to task-switch faster is to make demanding tasks less demanding.  For example, if you can simplify a task or make it more automatic, then you can reduce the demands on your attention.  This is the power of checklists.  They help you turn things into routines so you can move up the cognitive stack.

By making any demanding task more automatic, you reduce its demands on your attention, and so have more attention for a second (and third and fourth …) task.”

2. Pick Tasks That Require Different Parts of the Brain

If you pick tasks that are far apart in terms of areas of the brain, you can fake supertasking.  For example, you might find a motor task that doesn’t compete with a cognitive task.

“Pick tasks that use faraway areas of the brain–say, a motor task like flipping the omelet along with a cognitive task like remembering which kid likes which snacks.  If two tasks are far enough apart in your brain, it’s almost like you’re not even doing two things at once.”

3. Make It Easy to Pick Back Up Where You Left Off

Practice ways to remember where you left off, so you can pick your task back up quickly.

“Practice ‘fixing’ tasks in your mind.  For example, if you can remember exactly where you left off making an omelet, you can learn to come back to exactly that point without paying the ‘switching penalty’ that would otherwise be involved in reorienting yourself.

Practice saying ‘I am chopping onions’ or ‘When I come back, I will add cheese’ before switching to another task, and it should make it easier to switch back to the omelet later.”

4. Cue When You Need to Switch Tasks

Simple kitchen timers can work wonders.  Give yourself a cue when it’s time to switch back to another task.

“Outsource the monitoring that tells you when to switch tasks.  If you’re worrying about when you need to flip the omelet while packing lunches, packing lunches is going to suffer.

The trick is called task cuing–set your kitchen timer to remind you when the omelet is ready to flip (cue when you should switch tasks).

If you are helping to bring your strategy-application-disordered love one up to speed, task cuing might look like an ongoing narrative that reminds this person what he or she should be doing at any given second.  Try it, your loved one will totally thank you.”

Maybe you’re lucky enough to be in the 2 percent of supertaskers.

For the rest of us, we’re lousy at multi-tasking.  But take solace in the fact that we do our tasks better when we focus on the task at hand.

101 Proven Practices for Improving Your Effectiveness

The post Supertaskers: How Some People Task-Switch Faster and How You Can Too appeared first on Sources of Insight.