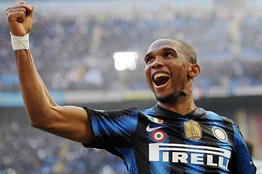 If Inter Milan and Russia’s Anzhi Makhachkala reach an agreement over his transfer, he will have to decide whether to stay in Milan, compete for the Champions League and the Serie A title and earn a prodigious amount of money, or simply leave and make more in salary than any athlete in the history of mankind—even if it means becoming invisible to most fans.

According to multiple sources, Anzhi has offered the 30-year-old Cameroonian forward a three-year deal worth $25.5 million per year after tax. Income tax brackets vary, but it would cost a club in a big European league—or, for that matter, the United States—between $50 million and $57 million per season to match the Russian club’s offer.

That’s not far from the combined earnings, excluding endorsements, of Peyton Manning and Alex Rodriguez.

Anzhi can do this for two reasons. One is that the tax rate for foreigners in Russia is a paltry 13%, so Eto’o would actually cost $32 million a season. The other, more important reason, is that Anzhi owner Suleiman Kerimov is a billionaire. He has already spent big on former Brazilian internationals Roberto Carlos, Diego Tardelli and Jucilei, and he’s happy to do the same with Eto’o.

Media reports in Italy suggest that Anzhi has offered $35 million as a transfer fee and Inter is holding out for $42 million. There’s a strong chance the two sides could meet halfway this week.

From Inter’s perspective, that would be a generous offer given Eto’o’s age, the fact that the club is scrambling to meet the UEFA financial fair play requirements that limit annual losses and his current $25 million yearly contract that extends through 2014. By selling him, the club could not only earn itself a hefty transfer fee, but also save some $75 million over the next three seasons.

This explains why Inter president Massimo Moratti said last week that the club had received “a very interesting offer—one we need to consider.”

But if the deal makes sense for Inter, Kerimov and Anzhi, it’s more difficult to understand Eto’o’s perspective, apart from the financial implications.

The term “rich man’s plaything” has been thrown around a lot, especially when billionaires with open checkbooks move into sports. But Anzhi takes it to a whole new level.

If Eto’o moves to Anzhi Makhachkala, he wouldn’t actually be moving to Makhachkala. He would be moving to Moscow. Because the club is located in Dagestan, which is politically unstable and possibly unappealing to wealthy athletes, the players live and train in Moscow during the week and fly about 1,000 miles to appear in home matches.

He would also be joining a club whose history dates all the way to 1991 and that returned to the Russian Premier League only in 2009. Last year, Anzhi finished 11th. This year, following Kerimov’s cash injections, it’s up to fifth. That means it could theoretically qualify for the Champions League next year with Eto’o.

But here’s the biggest problem of all: Eto’o’s move to Anzhi is the soccer equivalent of draping himself in an invisibility cloak. The only time Anzhi made mainstream headlines last year was when Roberto Carlos was racially abused at an away game in Samara.

How much does this matter to Eto’o? It’s tough to tell. While he has long been among the game’s best-paid players—in fact, money was one of the reasons he left Barcelona in 2009—he certainly doesn’t fit the stereotype of a greedy athlete.

It’s easy to be cynical, but he comes across as intelligent and articulate in interviews. Off the pitch, he works tirelessly with a variety of foundations and charitable projects across west Africa.

Logic would suggest that he has already made more than enough in his career to satisfy most of his ambitions, charitable or otherwise. Then again, $85.5 million tax-free and guaranteed over three years is an absurd amount of money.