Pac-Man is back. And to celebrate the 30th anniversary of the classic video arcade game, Google has unveiled its first-ever interactive doodle – a Pac-Man game that Web users can play straight from Google’s homepage. 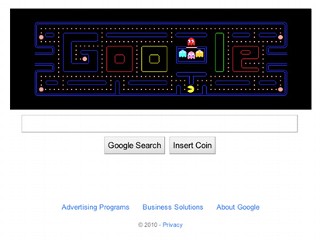 To celebrate the 30th anniversary of the classic video arcade game, Google unveiled its first-ever interactive doodle — a playable Pac-Man

On May 22, 1980 the now-iconic Pac-Man game was released in Japan by Namco Bandai Games. Originally called Puck Man, Pac-Man launched in the U.S. in October 1980 and went on to sell more than 100,000 units in its first year of production.
The name of the game comes from the sound of eating, according to the official Pac-Man website. “Paku” is the Japanese sound for “chomp.”
Now the game is listed by Guinness World Records as the world’s most successful coin-operated game.
To help recognize the pop culture mainstay, at 11 a.m. ET today (midnight in Japan), Google turned its homepage over to a Pac-Man game that can be played for the next 48 hours.
Visitors can click on the “insert coin” button or wait 10 seconds to automatically start the game, which reaches 256 levels.
more @ http://abcnews.go.com/Technology/google-celebrates-pac-mans-30th-anniversary-doodle/story?id=10709477