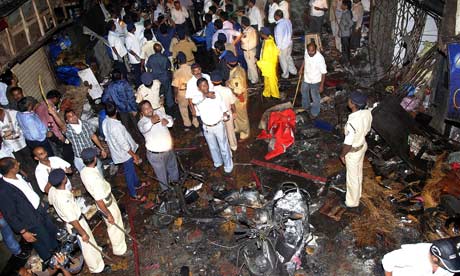 Mumbai was struck by three powerful bomb blasts during the evening rush hour on Wednesday, killing at least 21 people and injuring dozens more, including businessmen from the city’s thriving diamond, gold and jewellery trade.

India’s home minister, P Chidambaram, warned that the death toll could rise further. It is the fourth major attack by suspected terrorists on India’s financial capital since 2003.

“We know that the powerful explosives were planted in a scooter and a motorcycle, and 81 people with injuries are being treated in hospitals,” said Maharashtra’s chief minister, Prithviraj Chavan.

Asked by television news if the state government had received any warning of the terror strike, he replied: “No comment.”

Unlike some earlier serial bomb attacks on the city, no radical organisation claimed responsibility for the attack. However, suspicion fell once again on the Indian Mujahideen (IM), an underground terrorist group sworn to avenge the massacre of hundreds of Muslims in the neighbouring state of Gujarat.

A day earlier in Mumbai the anti-terrorist squad had arrested two car thieves allegedly belonging to the IM who had supplied stolen cars used for planting bombs in 2008 in the Gujarat cities of Ahmedabad and Surat.

The fifth anniversary of the Mumbai train blasts that killed more than 180 commuters fell this week, on 11 July.

Officials were careful not to blame any organisation for the early evening blasts, but the choice of neighbourhoods in south and central Mumbai suggested that, as in the past, the attempt was to terrorise the city’s businessmen, particularly from among its Gujarati community.

The first explosion was in the crowded, bustling Zaveri bazaar, a British-era market packed with hundreds of gold and jewellery shops.

The second was at Opera House, which has become a major hub for India’s prosperous diamond exporters.

The third blast hit the central Mumbai neighbourhood of Dadar, at the Kabutar Khana (Pigeon House) junction, where businessmen on their way to the railway station often stop to feed grain to the pigeons. Dadar is largely a residential district, and is the stronghold of the opposition Shiv Sena, a militant political party whose headquarters were targeted during the 1993 bomb blasts following the demolition by radical Hindus of a Mughal-era mosque in northern India.

Interviews by news TV correspondents roaming the streets revealed the anger Mumbai’s citizens felt at the latest attack, which comes less than three years after the deadly attacks on the city by Pakistani Lashkar-e-Taiba (LeT) gunmen in November 2008.

Chavan appealed to the people of Mumbai to “remain calm”. He said: “Please don’t believe in rumours.”

He was probably referring to speculation, which has proved incorrect, that 13 July is the birthday of Ajmal Kasab, the lone surviving Pakistani terrorist from the 2008 attack.

After the latest attack, slogans were chanted on the streets against Kasab, an indication of the resentment people feel that the LeT gunmen, who has been sentenced to death by a court, is still alive in jail as higher courts have still to hear his appeal against the verdict.

Anger was also directed against the failure of the authorities to anticipate and prevent Wednesday’s serial blasts.

“Please wake up. It’s high time you did something,” said an agitated Zaveri bazaar businessman, Hemant Mehta. “There is a question mark about the credibility of the home ministers of India and Maharashtra state.”

Since the November 2008 attack, money has been poured into upgrading police and intelligence capabilities in Mumbai. Even so, the most basic measures get indefinitely postponed. A Mumbai police plan to set up a city-wide 5,000-camera surveillance network has been gathering dust in the state home department since January 2009. If such a police CCTV network had been in place at least identifying the perpetrators of the attack could have been made easier.

“We see a lack of political will to take this on [protecting the city against terror attacks] on an emergency basis,” the media professional Prahlad Kakkad told CNN-IBN news channel.

“Mumbai is a soft target, it will always remain a soft target. The only way to combat this is through good intelligence, and that’s not there.”