Passengers on an Air France flight got an unexpected stopover in war-torn Syria after their plane had to make an emergency landing in Damascus.

The next surprise: “Passengers on Air France Flight 562 were asked to open their wallets to check if they had enough cash to pay for more fuel,” The Associated Press writes.

The problems for Flight 562 began when the Paris-to-Beirut flight had to find an alternate airport to land at because of civil unrest near that Beirut airfield. Air France had hoped to continue on to Amman, Jordan, but instead opted to land in relatively nearby Damascus as the plane was low on fuel.

Reuters writes “on landing the local airport authorities said they could not accept a credit card payment and would only take cash, an Air France spokeswoman said.”

“As a precaution and in anticipation, the crew asked how much money the passengers had in cash to pay to fill up with fuel,” an Air France spokeswoman explained to Reuters.

Fortunately for passengers, a solution was found and Air France was able to refuel without passing a hat around the cabin.

The unusual situation has received coverage from around the world, including a colorful from the Daily Mail of London that reads: This is your captain panhandling

Air France declined to say how – or how much – it had to pay to refuel the Boeing 777. The flight operated with 174 passengers and 11 crew, according to AFP.

Relations between France and Syria have become frosty since Paris joined other western governments in calling for the ouster of Syrian president Bashar al-Assad. Air France’s situation presumably was complicated by its March decision to suspend flights to Syria as conditions there deteriorated.

Passengers on the flight described the situation to the various news agencies covering the story.

“We went down in Syria where there were lots of soldiers … We thought there were some problems and that there was no money to pay for the fuel,” a Flight 562 passenger identified as Najib, a “42-year-old businessman,” told AFP. “They asked if the passengers could contribute for the refueling. Then they found a solution to the problem”

After refueling, Flight 562 left Damascus and flew to Cyprus, where the aircraft and its passengers spent Wednesday night before landing safely in the originally intended destination of Beirut on Thursday.

A bid to restore a 19th century fresco in a Spanish church has gone horribly wrong, with Jesus transformed into what one commentator has described as something out of Planet of the Apes.

The painting ‘Ecce Homo’ by the artist Elias Garcia Martinez, had been displayed in the Sanctuary of Mercy Church at Borja near Zaragoza for 120 years.

Churchgoer Cecilia Giménez decided she would try to renovate it. The trouble was she wasn’t quite up to the job.

“The priest was aware…he knew,” she insisted. “Of course I did it because I was told to do it… “

Asked by a television journalist whether she hid while she was carrying out the ‘restoration’, Giménez said: “No, everybody that came into the church saw me. I never tried to hide”.

Today the artist’s granddaughter Teresa García surveys the damage, finding it hard to take in what’s happened to her family treasure.

“Before she had only touched the robe, but the problem came when she started on the head,” she said. “Clearly she has destroyed the painting”

The transformation has given ideas to other would-be artists on the internet where the faces of everyone from Michael Jackson to the Pink Panther have been superimposed on the original fresco. 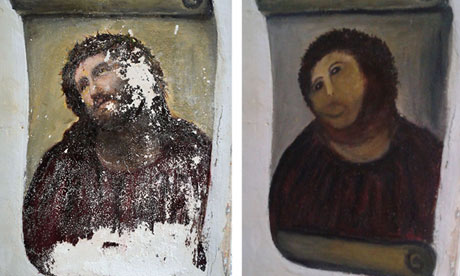