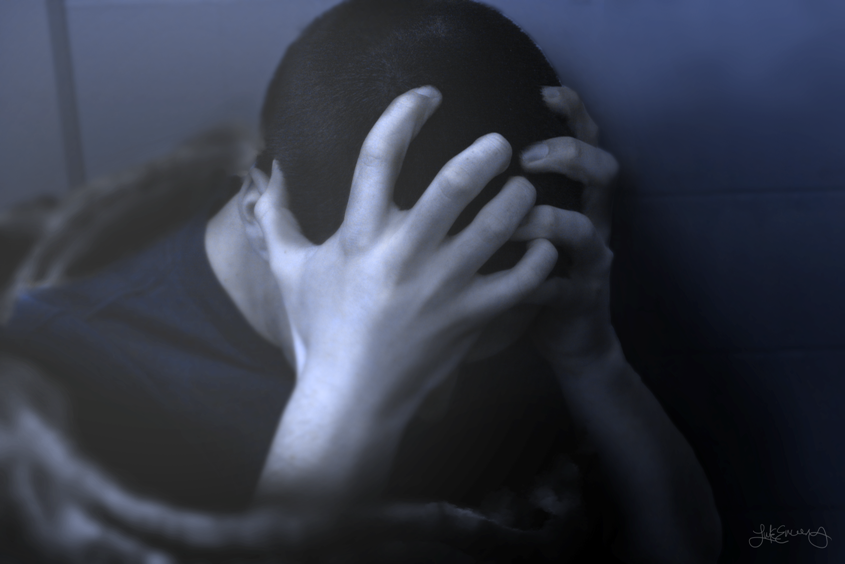 “The wound is the place where the Light enters you.” ~Rumi

“Out of suffering have emerged the strongest souls; the most massive characters are seared with scars.” ~Khalil Gibran

You know that foreboding fear we all have—that something will go terribly wrong and life will never be the same again?

Mine is that something will happen to our daughter. She is our only child. We battled infertility for years before conceiving her. I keep telling myself that it’s just an irrational fear and that every parent probably has it to some extent, but it’s a constant companion that stealthily follows me around everywhere I go.

So, on a Saturday evening, when we returned back from an evening out to pick her up from the playcare and were greeted by the sight of blood on her face and inconsolable weeping, my heart just stopped.

She had fallen off a playscape headfirst. It had happened minutes before we arrived. All the caretakers could tell us was that a tooth was knocked off. We rushed her to the emergency room.

After what seemed like hours, they gave the all clear—no head trauma or fractures—and sent us home with a prescription of painkillers and instructions to rest.

She spent the next twenty-four hours in pain and throwing up. She couldn’t even hold water down.

I tortured myself with fears that it must be a devastating head injury that the emergency room staff had failed to catch. She felt better the next day so I brushed my fears away

The next week was a whirlwind of visits to the dentist to extract fragmented and loose teeth. During one of the visits, the dentist noticed that her jaw was misaligned. We rushed to an oral surgeon.

The emergency room staff had failed to catch it—her jaw had broken. And now it was too late. The bone had already started to set in a crooked manner.

She’d need major surgery to reverse it. She was too young to do the surgery yet, but by the time she turns eighteen the misaligned jaw will likely bother her so much that surgery will be unavoidable.

A couple of weeks later, as the dust started to settle, I took her to the park to let some steam off. As luck would have it, she had another fall, and this time she broke her arm.

We hadn’t had any major trauma in her entire life. And now we had two sets of broken bones in as many weeks.

Waiting for the orthopedic to put the cast on, I couldn’t help but think, “Right now, our life sucks.”

And this wasn’t the first time I’d thought that.

A few years back, I’d felt much worse when my husband was in the emergency room, I waited outside with her, and the doctors had no answers for us.

And before that at work when a colleague was bent on making my life a living hell.

And when my best friend was lost to depression and wouldn’t take my calls.

And when I broke up with my first boyfriend.

And a million other times.

Every single one of us has these moments. It’s just the way life is. It’s what we do in those moments that matters.

For the better part of my life, I’ve felt flustered and incapable of handling these moments. Over time, I feel like I’ve figured out a few things that I can start doing to bounce back.

I’m sharing these with the hopes that some of you will find them as useful as I do.

It’s natural; when things go wrong, one of the first thoughts is likely to be “Why me?”

Here’s the thing though—“Why me?” is a weakening phrase. It only serves to increase our feeling of victimhood and makes us feel incapable of dealing with the situation.

By intentionally catching ourselves thinking “Why me?” and replacing it with “What next?” we not only gain back a feeling of control, but also figure out what we can actually do.

Anytime my daughter had a mini-accident after that, she would panic. I’d put on my calmest voice, even when I felt like screaming “Why us? Can we please catch a break?” and say, “Aww, poor baby. Are you hurt? Accidents happen. Do you think a boo-boo pad might help?” And yes, a boo-boo pad always helped.

Ever so slowly, we were back to being resilient in the face of mini-accidents again.

2. Force yourself to practice gratitude.

It is hard to feel grateful when you are dealt a blow—no matter how big or small it is.

I was devastated by my daughter’s jaw fracture verdict. I had to practically force myself to practice gratitude.

Every time I talked to someone, I’d say, “Well, we’re lucky it wasn’t a head injury.” After repeating it a few times, I actually started to believe it and started to feel the gratitude. And that eventually helped deal with the news of the misaligned jaw.

No matter what you are dealing with, there is always, always something to be grateful for. Force yourself to say it out loud a few times. Your heart and your mind will soon catch up.

When you’re hurt, it is equally natural to look for someone to blame.

In my case, I was tempted to blame myself, the caregivers at the playcare, the doctors at the emergency room, and so on.

But blame only serves to prolong the hurt. It makes it harder to let things go. It makes us angry and corrodes us from the inside. It brings negativity into our life.

If something is meant to be, it will happen. That’s it. Deal with it and move on.

4. Don’t give in to fear and despair.

This is a tough one. It’s so much easier to just give in and surrender to the fear and grief. But we need to stand tall—even when we feel two feet too short.

It was very hard for me to mask my worries from my daughter and project confidence. But I’m so glad I did.

Back then, for a while, I’d actually started to wonder if something was wrong. The foreboding fear that was my constant companion kept telling me that something bad was going on.

But slowly, she gained from my projected confidence and grew more confident herself. And got back to her monkey business. And didn’t having any more accidents.

And my worries started to fizzle.

When it comes to fear and despair, you have to fake it till you make it. And, sooner or later, you willmake it.

We didn’t like the jaw surgery verdict. We sought out another opinion even though it seemed pointless.

The new oral surgeon was old school. She suggested physical therapy. We set alarms on the phone and my daughter diligently did her exercises (bless her soul, she’s just a wee little kid, but such a sport).

After a month, the jaw was starting to get aligned again. Things are beginning to look good. Maybe we won’t need that surgery after all. We can only hope for the best.

No matter where you’re at or what you’re going through, don’t give up. Try just one more thing; maybe it’s just the thing that will resolve it for you.

It ain’t over, until it’s over.

As I type this article, I hear my daughter biking around the house.

And then I hear a loud thud. I catch my breath and wait. And there it comes: “I’m okay,” she calls out.

Source: “5 Helpful Things to Do When You Think Life Sucks,” from tinybuddha.com, by Sumitha Bhandarkar